Is the Blackmagic Ursa 4.6K fast becoming the go-to camera for young cinematographers?

Shooting an Exorcist inspired music video for under £2k

We've seen a revolution in affordable video cameras since Canon dropped the 5D Mark II and Magic Lantern got their hands on it. Since 2012, one company has been working hard at competing with high end cinema cameras like RED but at prices that match DSLR cameras. Yes, I'm talking about Blackmagic Design.

Regardless of the issues they've had along their journey  with reliability, black sun hole issues and poor performance in low light, they have come damn close to perfecting the art of making affordable and reliable cinema cameras that produce the most beautiful images. The Ursa Mini 4.6K and Ursa Mini Production 4.6K is a testament to that and they are fast becoming the cameras of choice for many cinematographers worldwide.

I caught up with Richard Oakes, a Cinematographer/Director at Dark Fable Media about his latest music video that was entirely shot on the Ursa Mini 4.6K. Dark fable media is a production company Richard started 6 years ago to specialise in music video production, but since then Richard has also been pushing into films having produced content for some of the biggest music labels in the world including Universal and EMI.

Could you give a short synopsis of the video and what inspired you to make this video?

So the video is basically a homage to The Exorcist with a different twist, mixed with band performance. The Director of the music video Adam Leader is also the singer of the band. He's a good friend of mine who also B cams on a lot of my shoots. He has always been a fan of horror especially classic horrors like The Exorcist and Hellraiser, he has them both tattooed on his arms, his dream was always to make a film or video like that.

Obviously, we referred to the original Exorcist movie a lot but personally I had Just re-watched SEVEN on blu ray, It's one of the most beautifully shot films I have ever seen and that inspired me to shoot a few parts in that noir style which brought a different feel to the project. I'm a huge Fincher fan and inspiration from him seeps into a lot of what I do as a DoP. We didn't storyboard on this project either, as it was a homage to the classic film we wanted to recreate the classic shots from the movie so in essence we used stills from the film as our storyboard.

What sort of budget were you working with and what were there any restrictions caused by this (if any)?

It was a very tight budget I think around £2000 all in all. We worked till 6am 2 days in a row and everyone put in 110%, obviously having more budget would have helped and a few people helped out as a favour which saved us in the long run, but it would have been nice to get them paid properly.

How did you find the right sets for your shots?

The house was the band's managers house, so no issues there. The corridor was built in the same room as the bedroom the next day. it was hard graft as I helped build the set but it was very rewarding when looking at the final piece.

Could you tell me a bit about the crew and cast you chose to work with?

It was a very simple crew, it consisted of Adam Leader who was the Director and Singer, CJ Ory who played the girl and also did the makeup, Jake Frances who played the Dad, and Adams partner Vanessa as the mum and myself as DoP. They were amazing to work with and everyone put their all into it. However we did have the dreaded exorcist curse on set, We were meant to be shooting from 8am till 11pm but at 8am on set CJ who played the girl and did the makeup became very ill on set and got so bad we had to call an ambulance and she was rushed to hospital. We were all very worried and at a complete stand still, we were about to call the shoot off when a t 5pm CJ phoned and said she had been treated and is feeling well now and wants to push ahead. so we started shooting at about 6pm, Jake had to leave by midnight so we prioritised his shots and then carried on shooting till 6am. CJ was a trooper and apart from looking possessed you would never know she just got discharged from hospital an hour before.

What camera was the film shot on and why?

The video was shot on the Blackmagic Ursa Mini 4.6k. It's the camera I own so that is always a plus to clients as it saves them renting in more gear. Personally, I love shooting on the Ursa Mini 4.6k. I know its image and I know how to get the best out of it for my clients, I love the fact I can put in my own custom LUTs into the camera so when setting up the shots I know exactly how it will look once graded. The clients also love this feature and it gives them more confidence on set rather than looking at LOG playback.

What other gear did you use and why?

We shot the whole video on the Sigma 18-35 ART 1.8 and Sigma 50-100 ART 1.8 Sigma 8-16.  Again I have these in my arsenal so it makes sense, I adore these lenses as they are super sharp and perform so well, reducing 18-100 down to 2 lenses on set enables you to work really fast and having that whole range at 1.8 is incredible. We used a mix of tungsten 1ks for indoors and the Aputure C120D for exterior moonlight and light coming through the windows. On the performance shots we utilised the remote to flash it on and off to simulate lightning coming through the window. The fact you can have the equivalent of a 1k daylight lamp on batteries made shooting exteriors in the garden and at the church a doddle. I highly recommend this light. 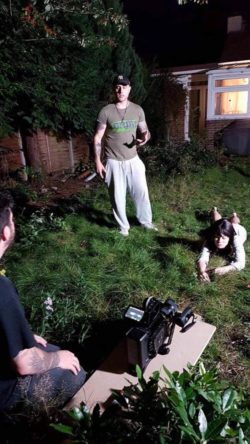 Were there any particular colour themes you were going for? If so, Why?

I wanted a lot of browns greens and reds and I also pushed these in the grade to give that 70s feel. We were quite particular about the colour of the wallpaper we used on the corridor, frustratingly it was the most expensive one we found but the red and gold was a beautiful mix to work with but gave us a regal feel with a violent undertone.

Could you breakdown the lighting of a couple of shots?

As you can see by the diagrams the setups were very simple, apart from the window netting we didn't use any direct diffusion but we did fog out the rooms to soften the light.

How did you light the bedroom? Could you demonstrate it using a lighting diagram?

most of the shots were lit with a really simple setup, we had one light outside the window shining in moonlight, and a 1k tungsten off to the side of the room. the rest was lit by the practicals you see in the room.

How did you guys pull off that levitating shot?

We mounted the camera above the bed and shot a blank plate of the bed, we then removed the mattress and put down a green screen and the girl then lied on a stool on top of the green screen. The trick to making it look right is not to change the lighting of the scene, it makes it a lot harder to key out but the result is a lot more realistic. in post then we put the girl layer over the bed plate and just moved the layers apart in z space and added a lens blur to the bed plate as it got further away. I was worried about how well it would turn out but think that is one of my favourite shots in the video.

Can you explain how you achieved the glazed over white eyes?

This was a simple case of using white contact lenses, it's a lot more effective than spending days in VFX.

If you had to re-shoot on another camera, which one would you pick and why?

Possibly the Alexa mini, to my mind it's the closest look to the Blackmagic that I'm used to working with, it's also really easy to cut in with the BM as a B camera which I've done on a few shoots. But I still find the Ursa mini less hassle to work with on set and I'm not a fan of the arri EVF.

In retrospect anything you'd do differently if you could re-shoot the video?

After the big delay on the shoot we had we had to rush quite a few shots in the bedroom and I wish i had a bit more time to properly compose and light some of the shots but it is what it is and I'm proud of how it ended up.

What was your NLE of choice for this film?

I tend to grade in resolve then Edit in premiere, Resolve is a powerhouse for grading and I love it, the fact it comes free with the camera is amazing and a no brainer. I've always Edited in Premiere, when I first got into video I started with VFX in after effects so buying creative cloud made more sense than going to different brands for different programs.

One other post production process we used for this video was faking a basic extension to the wide shots of the corridor by fading it to black. in the original footage you can see the edges of the corridor and ceiling.

What future projects have you got planned?

Too many! I'm currently 50% through filming the feature film Homeless ashes Directed by Marc Zammit which highlights the struggles of homelessness. I'm in post production for the short film Chimera Directed by Patric Ryder and we are planning his first feature at the moment.

I have 3 feature films lined up for next year as well as a load of music videos that tick over each month. Mixed in with a sprinkling of corporate work and currently writing my own first feature film with Adam Leader and Nadia Lamin. It's all go.

You can find out more about Richard and his work below:

Get 5 FREE Tracks - with 100% unrestricted use - when you sign up to our newsletter today!

Take full control of your dynamic Soundtrack and keyframe your music.

Need a Commercial license for Ads, TV, or Films?

Or continue with email

Get started for free

Or continue with email